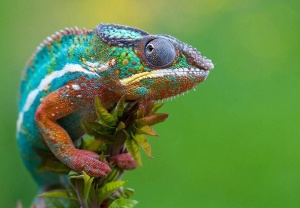 Doug wowed me with this in one of our sessions:

“I always wanted to blend in . . . like a chameleon.” Then looking away reflectively, he added, “You know, it takes a hell of a lot of energy to change my colors.”

He’s right. So why do we do it? It’s all about making sure we’re liked and loved. If we don’t make ourselves acceptable, we fear rejection. And rejection is a very lonely place.

We all do our share of adapting and approval-seeking. It only becomes problematic when we lose sight of our true selves. In the book, The Dance of Anger, Harriet Lerner describes that condition as being “submerged” or “de-selfed.”

Here’s one of Doug’s examples: In the midst of ordering chicken from a menu, his wife interrupted, “You don’t like chicken—you like roast beef!”

He remembers his meek, defeated response at the time: “I guess you’re right. I don’t like chicken.”

Sadly, Doug didn’t really know what he liked. He was used to being defined by the outside world.

When I first met Doug, he described himself as unhappy most the time. That makes sense because de-selfed people can’t be happy. They live a compromised existence which includes spending endless amounts of energy pleasing and accommodating others. The end result is often depression, a depleted interest in life, and hidden anger forever percolating just below the surface.

Adrian was a card-carrying member of the de-selfed club when I started seeing her. Her comments echoed Doug’s:

“I’ve spent most of my life adapting to others,” she said, “disguising and burying myself to get approval. I’ve done it so well for so long, I now have difficulty grasping who I really am.”

“I’m a chameleon and I don’t know my real color.”

Adrian started submerging her true self at an early age. “My mom’s love would turn off if I didn’t say and do what she wanted,” she said. “I wasn’t allowed to have a self.”

Adrian’s habit of self-denying followed her directly into her marriage … beginning, actually, on her wedding day. Her father handed the newlyweds $500 with special instructions. “He insisted we use the money for having a good time on our honeymoon—and nothing else,” she said.

That incident was a snapshot of things to come. Adrian listed off a series of comparable incidents that took place throughout the 23 years of their marriage. She then lowered her head solemnly and said, “I think my mantra has always been: ‘Yes dear, anything you say.'”

Adrian so needs to speak up in this relationship. She needs to share the person she really is with her husband—not just with me. How else can she relieve her depression and resurrect her actual self? And how else can the relationship possibly change if she doesn’t change?

When Adrian first started therapy, she thought her problem narrowed down to two people, her mother and her husband. Her thinking: If only they would change. But she has moved beyond that and is realizing it’s not what others have done to her, but what she’s been allowing. Until she realized that, she was powerless to change things for the better.

Something very interesting happens when we communicate directly from the depth of our natural being. Our total person comes forward. Call it our true self.

4 responses to “The Unhappy Chameleon”