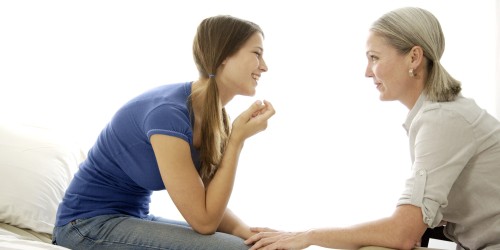 Let’s dispel a common myth about teenagers. They actually yearn to communicate with their parents, despite evidence to the contrary.

But communication must be a two-way street, and for a vast number of teenagers, that isn’t happening. It’s not so much a refusal to open up—instead, their silence is often rooted in discouragement because of something the parent is doing or not doing.

Nell, a 17- year-old client, put it succinctly as she expressed the frustration that many teenagers experience: “Parents think that just because they’re older, their opinions are always right. Many times, when my mom is talking to me, she’ll accuse me of not listening. That’s not true at all. I am listening, but I just keep my thoughts to myself. I don’t bother to share my opinions or disagree with her because she thinks she’s always right.”

Apparently, her mother feels she’s right about Nell’s emotions as well: “My mom will ask me how I feel, and when I tell her, she says, ‘No, you don’t.”

Allison and Tara provide another example of a communication shut-down.  In one counseling session, 14-year-old Allison opened up to her mom, Tara, saying, “I’ve always felt you liked [my brother] Mark more than me . . . .” Before Allison could even finish her sentence, Tara interrupted defensively, “That’s not true! I have always cared for you kids the same!”  The desire for any further discussion was effectively squashed.

Because Allison became quiet, Tara mistakenly believed that the problem was resolved. It wasn’t. That’s because the problem is rooted in the heart, not the head. Allison doesn’t need words to straighten out her thinking—the remedy must be aimed directly at the heart.

Allison may have her facts wrong—her mother may truly love her children the same—but her personal experience says otherwise, and that’s where Tara needs to go.

Here is the advice I gave Tara: Get control of that knee-jerk need to defend yourself. Instead, strive to understand why your daughter feels that way so you can tackle the problem at its roots. Be receptive to her perspective as she reveals why she feels the way she does. Comfort her and apologize for any pain you may have unintentionally caused.

Tara was game to give it another try. She warmly invited Allison to explain why she felt her mom was favoring her brother.

Allison tearfully responded: “Because you never get mad at him. You’re always yelling at me. I can’t do anything right! You think I’m a terrible kid.”

Again, Tara went on the defense.  “No I don’t!” she argued, giving examples to the contrary. The brief argument that followed ended with Allison’s silence once again. Tara didn’t win the argument. In fact, she lost. She forfeited communication with her daughter and reinforced Allison’s reluctance to share her thoughts and feelings.

Sixteen-year-old Justin’s parents complain that he never talks to them. The reason became obvious in a family session about Justin’s grades. Justin’s parents grilled him like police officers. Their interrogating, warning, shaming and lecturing tactics virtually guaranteed a shut-down. With his arms folded, Justin said nothing as he gazed at the floor. If Justin’s parents want productive dialogue with their son, their manner must invite that.

What makes teenagers comfortable enough to open up to their parents?  For the answer, we adults need only to look at what works for us. What entices us to open up and talk?  The answer is simple: We feel safe, and we feel convinced that the other person is truly interested in what we have to say.

2 responses to “Raw Truth from Teens”