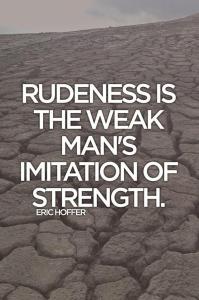 I like what Sydney Harris, the late American journalist, had to say:

“People who are proud of being brutally frank rarely admit they are more gratified by the brutality than by the frankness.”

Personally, I don’t think there’s anything admirable about stomping on someone’s dignity. It’s easy to be offensive and degrading. It’s much more difficult to get a point across while remaining tactful . . . even kind.

Straightforwardness occupies two categories: assertiveness and aggressiveness. One is respectful while the other is anything but. Check out this website for more on the difference between the two.

Aggressive communicators aim to dominate and control. Their body language and words convey—loud and clear—“I expect to get my way,” and “I’m always right.”

Tom’s boss is a perfect example. According to Tom, he’s  abrasive and undermining.

“No one wants to speak up at meetings,” Tom said. “It’s the fear of being humiliated. Just last week, I was ridiculed for a less-than-stellar sales report.”

Tom refers to the company’s teamwork philosophy as a “joke. Nothing original is discussed in our meetings,” he said. “Brainstorming may be on the agenda, but our ideas and opinions are instantly argued down. Brainstorming is just another word for us nodding while he postures and spouts out his ideas.”

Not surprisingly, such an atmosphere stifles enthusiasm and commitment. So bosses like Tom’s might as well kiss productivity, creativity and innovation goodbye while they watch dedicated employees like Tom walk out the door.  “I can’t continue to be subjected to this kind of treatment,” Tom said. “When you have to literally drag yourself to work every morning—not because of the job—but because of a person at that job, then it’s time for a change.”

No question, we admire people who speak truthfully and boldly—who tell it like it is. Such people are cut out to be leaders, whether we’re talking about leadership in the office, on the football field, in the classroom or in the home.

I frequently hear parents complain about their child’s lack of respect. Respect is a noble quality, but it’s supposed to run both ways. It’s ludicrous for parents or anyone in a leadership role to expect to receive what he or she is unwilling to give.

Here’s what one client had to say about her experience with both types: “I felt like I was working for my former boss, who acted like a dictator, but I feel like I’m working with my current boss.”

Let’s face it, force and disrespect may engender obedience and fear, but they don’t engender loyalty, trust and a desire to cooperate.

According the Wayne Dyer, leaders worthy of our admiration share a common principle: “How do we help influence those around us in ways that are going to make them better, us better, the world a greater place?”