The Latest Wow: She Won’t Let it Go! 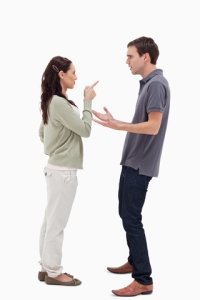 No question, guys would prefer—no, jump at the chance—to run a 20 mile marathon, uphill, rather than answer to a “we-need-to-talk” invitation from their female partner. Why is that? Could be they anticipate being dragged endlessly through the mud. It happens. Pure torture.

So avoidance is understandable. Who gleefully walks into a battlefield? Actually, according to scientific research, women don’t mind it as much. For us,  peace can and is often sacrificed for the sake of confronting a bothersome issue.

Not so for men. Their brains actually suffer more—undergo greater stress—in such encounters.  Could be why they work so hard to avoid them, or why they use humor to lighten things up.

Another thing that can be agonizing for a man is discussing a problem that doesn’t have a solution or apparent end. Pure torture, again.

So women take note—there’s hope! Your man may be more willing to participate in touchy discussions when he receives a “hey-I-need-your-input” invitation. It sounds friendlier and carries a message that an end is in sight—a solution can be reached!

The reason I’m writing about this is so I can share with you what a man said to his wife not long ago in the midst of one of those elongated and stressful discussions. I’m still laughing about it:

“What do I have to say to make you feel you won because I’m tired of rehashing the same old thing.”

Filed under Couples, The Latest Wow!