Listen to Your Soul

So much about our world today is making our souls shudder.

I’m referring to things like unleashed hatred, brazen condemnation of differences, unbridled exploitation, an emerging epidemic of violence, rudeness and disrespect in all forms.

Increasingly, we’re seeing that a cold-hearted mentality is valued—even admired—over a kind and warm heart.

These disturbing elements have been around for eons—though only faintly visible, so they’ve been easily ignored and denied. That convenience has evaporated. We’re forced to own some harsh truths about “us” and the evolving character of our world. Daily examples are displayed on every screen we own. They’re rampant in the entertainment industry, on social media, in the news and in the political arena.

Outrage, revulsion and anguish are natural responses, but we can’t bear to experience such emotions for sustained periods of time. So we have coping mechanisms that make reality seem a little more palatable. Here are a few:

I have a recent example of adaptation in action:

Not long ago, while making a purchase in a department store, the background music was . . . well . . . let’s just say hard to take. The longer I stood there, the stronger my empathy grew for the employees, including the one waiting on me. “That music has got to get annoying after awhile,” I said. “Not really,” she said flippantly. “I’ve learned how to tune it out.”

We humans are wired with an ability to adapt to almost any annoying situation. It saves us from unending and sometimes unbearable torment. That can work to our advantage, as in the case of the sales clerk. But adapting has a downside. Consider what happens when we ignore the weeds in our garden. Not good.

Closing our eyes to troublesome realities doesn’t serve us very well. Things go wrong. In essence, the weeds get out of control.

We see this happening when we put Band-Aids on problems at home, when we ignore wrongs at work, and when we turn a blind eye to what our soul finds repugnant on the national or world stage.

Robert Bly, acclaimed poet and author, has garnered attention for his thoughts on the collective human condition—how we behave as a society and how that impacts the human psyche.  There are people, he says in Men and the Life of Desire, whose souls shudder when exposed to “the cruel things people can do to each other.” He also points out that “when you learn to shudder, you can’t take part in it any longer.” To illustrate, Bly used the movie Casualties of War. The character played by Michael J. Fox couldn’t bring himself to participate in a gang rape despite the fact that he was harshly ridiculed by the other men for refusing. Such men, according to Bly, are “not men, but bully boys.”

Fox’s character went against the gravitational pull of conformity and listened to his soul instead. I label that courage.

Bly goes on to say that our culture discourages shuddering. Let’s face it, we’re paying a stiff price for that—personally and socially.

In one of my posts from a few years ago, Be Brave and Speak Up, I wrote:

Every time we ignore or neglect to speak out against unkind acts, we allow one more piece of debris to contaminate the collective spirit of humankind.

In other words, weeds multiply.

Love Shouldn’t be a Prison, and True Love Isn’t 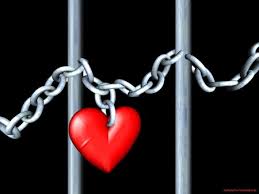 Since this is the month we celebrate Valentine’s Day, I thought I’d dust off one of my favorites from several years ago that seemed to resonate with many people. Even if you’ve been following me from the beginning, this one’s worth a second look:

One thing that assures a long-lasting relationship is kindness—each partner treating the other with the same respect, courtesy and gentleness that characterized their mode of relating in the beginning.

Unfortunately, our human tendency after settling in is to relax those standards. We drop those nicer habits. Not good. A relationship should be a place where flowers grow . . . not a place where we’re constantly encountering prickly nettles.

Another crucial element is freedom. Love shouldn’t be a prison, and true love isn’t.

Go to my column titled “The Grander Version of Love” where you can read about Carl and Lynn. I go into more depth about kindness, freedom and two other components that comprise a healthy relationship.

I welcome your views!

“Making marriage work is like operating a farm. You have to start all over again each morning.”