“Most people talk about fear of the unknown, but if there is anything to fear it is the known.”  Chopra

You know . . . there’s truth to that. Not long ago, I watched the movie Room. It’s about a mother and her son, Jack, who are confined to a shed they call “Room.” Jack’s mother was abducted by a man when she was seventeen. Two years later Jack is born. “Room” is the entirety of his world until they escape shortly after he turns five.

The world outside of Room is foreign to Jack. Even though he has an abundance of new people and experiences at his disposal, he would occasionally ask his mom if they could go back. That tiny world—including fewer freedoms—possessed a powerful gravitational pull.

The good ole status quo offers the security of the familiar. It surrounds us with predictability.

Jack mirrors our natural resistance to change, even if it would be to our advantage. Let’s face it, the familiar often wins out, whether it’s staying glued to an unfulfilling occupation, an unhappy relationship, a self-defeating coping mechanism, an ineffective way of relating, a limiting belief about something, or a fixed way of doing things.

The known seems safe. But that’s an illusion. In reality, we’re captives of a habitual and stagnating existence, and that spells confinement.

Why should we be lured by the unknown?  I like Chopra’s answer to that question:

Yes, we’re conditioned beings and it takes a lot of courage to venture into new territory—to leave our Room. But to be free we must.

“Why am I the last to find out? I didn’t know my wife was unhappy. She never told me!”

I had to tell him the truth. “Yes, she did, Todd. There were clues. You just weren’t seeing them.”

Beth had grown quiet and distant in his presence. In contrast, she was lively and talkative around her friends. Passion and affection were gone. She constantly seemed sad.

Where did Todd go wrong? Simply put, he didn’t do a good job of listening. Early on, Beth tried to open up and express herself but such attempts were abruptly shot down by his defensiveness. Eventually, she quit trying to be heard. So . . . the slow erosion of a relationship was underway.

Genuine listening is more than mere cerebral activity. Central to listening is the state of the heart and the mind. Are they both open?

Todd treated Beth’s grievances as one would a debate. Determined to defeat her, he aggressively attacked her opinions, concerns and feelings. His goal was to win by convincing her that she was wrong.

Instead, he convinced her that he wasn’t there for her.

When an exchange of thoughts ceases in a relationship, so does the intimate connection.

“You may be a winner when it comes to debates,” I said, “but your style doesn’t keep a marriage intact.” I pointed out that the goal in a relationship is to have two winners.

Downcast, he asked, “How do I get her back?”

Listening with the heart.

When that’s occurring, the listener is sincerely engrossed and curious about what the speaker is saying.  The speaker doesn’t  sense impatience, irritation, judgment or disinterest from the listener. And there’s no fear of being pounced upon.

More than the desire to win her back, I urged Todd to let his love for Beth translate into a yearning to understand her and remove her distresses.

A few sessions later—when I knew Todd was ready—I arranged a session with the two of them. His role was to listen. Leaning forward with warmth emanating from his eyes, he invited her to tell him why she was considering leaving him.

She talked and he listened. She was able to say all that she wanted without being interrupted or attacked. Nervous at first, she steadily began to relax as he remained calm and caring. Beth felt free and safe to express what was on her mind.

I was particularly touched by something Beth said near the end:  “When you listen to me it lets me know I matter, and as a result my heart opens up a little wider.”

Signs of progress don’t automatically usher in a fairy-tale ending. It was going to take time for Beth’s heart to trust and feel safe enough to freely open up. But I knew if Todd sincerely dedicated himself to change—and remained consistent with those changes—there was hope.

In the past, Todd had used his intellect to win. To his amazement, he learned that only the heart knows how to win . . . at love. How nice. 🙂 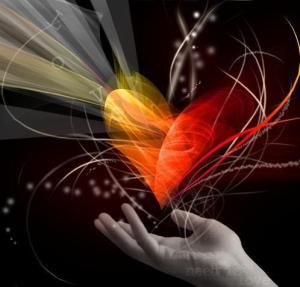 The heart is a weapon of mass construction.

I’ve learned to be careful when deciding to cooperate with such nudgings because opportunities start cropping up everywhere.

So yep, a challenge presented itself just a few days later. It took place while I was standing at a counter in a restaurant. I had just placed my order and the cashier told me what I owed. I asked her if I could write a check. “Oh no,” she said in her usual brusque and tactless manner. “You can only pay with a card or cash.”

Over the years, I had watched this woman’s attitude as she dealt with customers and puzzled over how she managed to keep her job.

Reaching out to something deeper in her, I asked warmly: “Can you say that with a smile?”

“Your smile is beautiful,” I said. “It lights up your whole face . . . and besides, it makes me—the customer—feel good inside.”

The look on her face was priceless as she thanked me.

Increasingly over the years, I see that being forthright—when it comes from the heart— is a gift, even an act of love. Unfortunately, we tend to shy away from such directness because we fear it might seem rude, or it could inflict pain, or it may be a wasted effort.

All I know is I’m grateful for the people in my life who didn’t hold back telling me what I needed to hear.  How lucky for me they didn’t tell themselves: What good will it do? It won’t make any difference. Those bold people made me stretch. I thank them for that.

By the way, that employee I was talking about . . . she hasn’t stopped smiling.

Yes! We CAN make a difference.